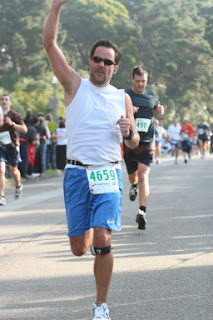 Just got back from the race, so it's time for a race report!

The Scene.... A beautiful sunny day, high 40's to start, maybe reaching low 60's at the end, no wind to speak of. Thru Golden Gate park, out and back along the Great Highway and then back into to the park for the finish. Net downhill of about 300 feet. About 6,000 runners.

The downhill....Next came a nice long downhill and I was feeling good so I really opened it up getting down to 6:57. As we flattened out I kept the pressue on and got through those 2 miles at 7:12. Still feeling good!

The Great Highway....Just before mile 7 we leave the park and start an out and back along the road that runs right by the pacific. It's beautiful but I have to admit I didn't look at the ocean once. It's about 3 miles out and 3 back. Keep the speed up and cover the first 3 at 7:29. When I crossed the 8 mile mark I was flying, and it was 1:00:27. This was faster than any of the paces on my little chart so I decided I was just gonna run all out. Feeling pretty good!

The end.... Mile 12 came by at just after 1:31 and I gave it everything I had left (which wasn't all that much to be honest). The last 1.1 mile was quick at 7:18, including a nasty little bugger of a hill just before the finish. Caught a lot of people in that mile and crossed the line at 1:38:54 feeling spent, but really happy (although I think I may be paying for it tomorrow).

Average pace was 7:33, way ahead of the planned 8:00 pace, and only 5 seconds slower than my best 10k. Beat my half PR by almost 13 minutes (or 1 minute per mile). Met all my goals for the race, and also for the year at this distance. But the best, best, best bit of all of this, is that I saw my marathon coach from the Honolulu marathon at the start (she is the one who saw me walking/crawling at mile 20, and 21 and 22....). We were around the same pace to start but she passed me by around mile 6. She was about 30 seconds ahead at the turnaround (10 mile) and I didn't see her again til after the finish. However, it turns out I must have passed her somewhere in that last 3 miles without noticing and I beat her by about 10 seconds! Ha! Felt very good about that!

Now it's time to replenish some of those carbs with some well deserved beers & BBQ as I watch the Superbowl!

great job alan! yes, i am alive and well. and i found my voice, how about that!

I suggest you add a link back to this site for continued donations.

thats an amazing run! almost Landis-esque. ;) just kidding. the course was awesome and I will be back next year and try to beat 1.38