Arrived in Oakland about 45 minutes before the start.  Weather looked good; cloudy, light winds (5mph) temps in the high 40s.  the full marathon was already underway as it started 90 minutes before the half.  We would meet it about mile 3-4 and run the final 10 miles together.  If all went according to plan I would be running with the marathoners who were doing around 2:50 pace.  This should give me people to chase and catch as my half pace will be about 20 seconds faster. 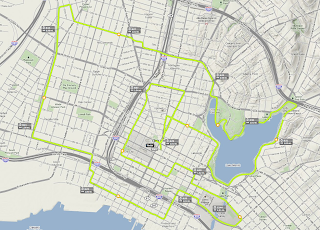 Mile 1: gun goes off and I am off like a rocket.  Look at my garmin and it says 4:55 pace, which I know is wrong.  It was messed up with the building so I keep going.  Ease up a little but still hit the mile 1 marker in 6:04.  Another dumb start!

Mile 2+3.  Got under control here, we were done with the hill and the buildings so I settled down on a comfortable pace which turned out to be about 6:22.  Missed the mile 2 marker but crossed 3 at 18:48, which was 27 seconds ahead of plan.

Mile 4+5.  Uneventful miles.  Felt good, hit a little windy area and tucked in behind a small group to get through that.  Merged with the full, which was not very densely populated!  Still Steady at 6:22 pace.  Mile 5 marker was 31:33, so now 32 seconds ahead of plan.

Mile 6+7. This was in West Oakland, and was long straight sections.  I passed a full marathoner who looked pretty strong and he hooked on to me for these two miles.  Pretty gutsy of him to hitch a ride at 6:20 pace for miles 20-21 of a full marathon but he hung in there. It helped keep me steady as I did my best to pull him along. Splits were 6:17 and 6:19 and I was done with 7 at 44:09, now a solid 46 seconds up on the plan.  At this point I was thinking that a sub 1:25 was in the bag and that a PR was a real possibility.

Mile 10 + 11.  These went round Lake Merritt and lots of twists and turns as it went down various footpaths.  Part of the trail was muddy with puddles and part was new gravel.  After the smooth roads for the last hour this was a big change.  I was struggling but decided it was time to man up and not flake like I did at kaiser.  Managed to hold it together and at the end of mile 11 I caught up with the female marathon leader.  She was doing well but as I caught her she slowed and it was clear she was running on fumes.  With 2 miles to go she was not going to have much fun, but #2 was nowhere in sight so unless she collapsed she had the win (she won in 2:53).  My splits were 6:29 and 6:30, although my garmin pace hadn't slowed much (6:24, 6:22).  these 2 miles came in long (as did the next 2) as I think they stretched the end of the course to accommodate the relocated finish line.  They had to move that to make the full course the correct length after some road changes and since the half/full shared the same start/finish lines I think we had a little bonus distance added!  At mile 11 I'm at 1:09:54, which is 42 seconds up. Fuzzy math tells me that a 6:25 pace will get me a PR so I keep my head down and push on.

Mile 12. Definitely hurting now and I hear breathing behind me from someone definitely working hard.  I think it's the marathon girl hitching a ride so I do my best to run a steady pace.  We go through mile 12 uneventfully, but painfully & noisily, at a garmin pace of 6:22. Mile split ended up being 6:30, so I'm thinking that the PR is getting very close.  I'm now 37 seconds up with 1.1 miles to go.  A PR required me to beat the pacing plan by at least 22 seconds.

Mile 13. surprisingly my female shadow overtook me here.  more surprisingly it wasn't the female marathoner but some tall superfit looking guy.  and yet more surprisingly he kicked my ass.  I hung with  him for a few steps but he was definitely surging hard.  I decided he was not my age group so let him go.  This was the mile with the small hill so I just concentrated on running strong and keeping on pace.  Aiming for 6:25 as I knew that meant a PR.  Mile 13 marker came up and my split was 6:30.  Time was 1:22:54. I had 53 seconds to finish to PR.  However, you can't see the finish yet as they is a late 90 degree bend before the line. (This photo is just before the turn.  Note the huge crowd and relaxed  & comfortable looking running stance!) 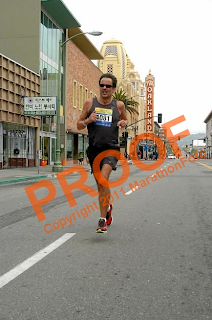 Final stretch.  Now I decided that I am not going to miss a PR by slacking the last part and I gave it everything.  Turned the corner at a sprint and the crowd appears and is really noisy. I can see the clock 1:23:16.  I have 30 seconds...... I am flying down the home straight and have no idea if I am gonna make it.  Cross the line, stop my watch and look down.  1:23:33.  Good for a PR of 14 seconds.

Results showed me to be 22nd overall, 4th master, and 3rd in the 45-49 age group.  Overall I am really happy with the race.  Another dumb start but I think that's just how I race.  I managed to stay strong when it got tough in the 8-10 mile range, which was not the case in the last race.

And a race report wouldn't be complete without a "pirate photo".  A good pirate shot has to have no visible lower leg, the other leg planted flat on the ground and the body looking as motionless as possible.  Extra points for suitably pirate-like grimaces!   I swear they try to get these shots. I really like the sticky up thumb in this one! 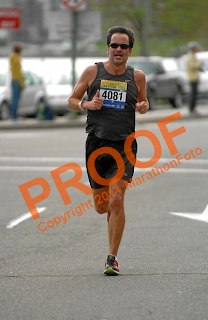 The race plans are taking shape....

Of course, this all assumes I stay healthy and continue to get back into shape.
Posted at 11:02 AM No comments:

A couple of reasonable training weeks completed, bringing the total for the last 10 weeks to about 520.

So I am slowly getting back into shape.  The tempos are OK at 6:25ish pace and they now feel pretty easy, so it's time to stretch them out a little longer and try to get up to 9 at a similar pace.  Trying to get to 70 this week, then 60 and then it's race week in Oakland.
If all goes well I'll get under 1:25 (which gets me seeded entry to Bay to Breakers) and if it is a really good day I'll go for a 1:23 something.  I think I am OK on pace, but not really there on endurance yet, so it's likely to be another crash and burn at mile 10 type of race.
Still haven't picked out the next marathon but it's looking like one of these:
I think a sub 3:10 is realistic in all of those, just need to pick one that fits well with the rest of life and get it done.
Posted at 4:39 PM No comments: