So August is just about over, the first few steps back onto dry land after a summer of pool running. Not feeling very good about either my fitness or my achilles. It's off to a new doctor for me on September 12th to try and get some advice that will get me through this and back to normal.

September Goals
-- who knows at this point. I'm going to do pretty much nothing (probably will run a few easy 4-5 milers) until I see the Dr. and then it all depends on what he says. This Dr. is a distance runner (2:40 marathon) so I'm hoping I can get some more insightful diagnosis/advice than "stop running" or "maybe you should have surgery?"
Posted at 8:26 AM No comments:

A mixed week. Good to have run three times (over 15 miles total....) but not feeling very confident that my achilles problems are really over.

After Thursday's faster run it felt fine, but started to stiffen up towards the end of the day. Friday didn't feel very good. By Saturday morning things were fine, but an easy (8:34 pace) 5 miler brought the ache back by the afternoon. Took things very easy Sunday, and by this morning it was all fine again. So I'm not sure whether this is just things straetching out again after some downtime or if my Thursday run has just torn up my achilles again. I'm going to just run easy, easy miles and do some gentle stretching this week and see what happens.

I'm now sleeping with a night splint, which is basically a plastic shell that you strap on your heel. It runs under the foot and up the calf and keeps the foot at 90 degrees. This stops you from stretching, twisting or compressing the achilles tendon while you sleep. It has completely eliminated the morning pain that I had been having the last 3 weeks. I wish I'd bought this a long time ago.

So given my dropoff in fitness and high likelihood that I'm not really recovered, I'm not feeling especially good about the 10k on September 16th, and the half marathon on October 14th now looks awfully close. Guess I'm going to have to take things easy, as I am certainly not looking forward to anymore pool running. I think it's time to focus on getting strong enough for London in April, which means being able to start training for real around Thanksgiving, if I focus on these short term races I'm going to bugger everything up.
Posted at 7:15 AM No comments:

Just ran my first fast miles since June 14th. My favorite 5 miler that goes from my house, out to Los Altos Hills and back. A mile of roads to start, then 1.5 miles of trails with a nice little climb at mile 2. It's a run that I've done many times so I was interested to get a good comparison to my pre-injury runs.

Started out easy at 8:00 pace for the first mile, then progressively picked things up. Fastest pace dipped just under 7 (haven't seen 6:5x on the watch for a very long time!) and the mile splits were 8:02, 7:30, 7:19, 7;32 and 8:00. Average overall was a respectable 7:44 for just over 5 miles. It was nice to get moving quickly again after such a long break. Didn't feel too strained, and achilles was fine, but I know my heartrate was pretty high and the average was 165 (which is usually what it is for a half marathon)

On May 28th I ran this exact same route, in very similar weather at the same sort of pace. That run was a slightly steeper progression (8:30 down to 6:54) but average pace was similar (7:41). Heartrate for that run was only 154. So I'm up 11 beats for a tempo run. Or put another way, I'm running slower at 165 than I used to. Previously that heartrate, for that sort of distance would have been run at around 7:15 pace, so I've lost about 30 seconds/mile since the end of May, which is pretty depressing. Guess I should have run a little harder in the pool on some of those days....

Of course, I need to do all this without buggering up my achilles again, which has been OK through these first few weeks back, but I'm obviously at fairly high risk of doing too much too soon. Let's see if I can manage to reign in my enthusiasm long enough to do this properly.
Posted at 9:20 AM No comments:

one thing I forgot to mention..... Now that I'm running again, I have completely bailed on pool running - Did none this week, and only one last week. Barring re-injury, I will be very surprised if I ever do any more, even though it is supposed to be part of my training for another 2 months. It's just going to be running, stretching, calf exercises and leg weights (plus, shockingly, I actually did some situps the other day!)
Posted at 8:47 AM 2 comments:

Yesterday was another run, 4.5 miles at an average 8:01 pace. Soft trails with a few easy hills. It was warm, probably in the 80s, and I definitely felt the effort at the end. Achilles was OK, there was some discomfort when running anything uphill, especially if I didn't back way off the pace. Feels OK this morning, just a little ache, but not much more than the other leg.

I've been looking at my pace/heart rate for these last 2 runs and comparing to some of my pre-injury trends. The very basic measure I use is average heartrate divided by average speed. At the end of May I was running just under 20. (When I started a year ago, it was around 28). These last two runs were 20.5 and 21.4. This simple measure is the red line on the chart below [lower = better].

Now heartrate/speed doesn't take into account how hilly the course is or how far you run, so I have a more complex formula that includes distance, elevation gain, and average elevation (for running in Tahoe). This is the blue line on the chart below [higher = better]. Pre-injury trend was about 47, with some runs peaking just over 50. These last 2 runs were 41.3 and 43.6, which is about where I was in terms of fitness way back in February.

Neither of these formula take into account temperature, since most of my runs are in the same range. The last two runs were both in the daytime sun when it was at least 80 degrees, so I'm hoping it's not as bad as it looks from these runs.

Overall it looks like I have definitely lost some real fitness, possibly as much as 4 months of training (early Feb to late May) but it's probably too early to tell. After a few weeks I should have a better idea, and of course I'll know for sure after the first race, which is currently planned for September 16th. 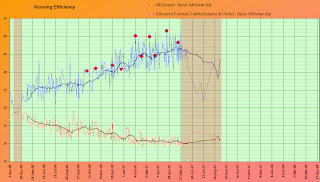 Red dots are races, white diamonds are runs at altitude (Tahoe), red shading is injury periods.
Posted at 8:04 AM No comments:

Yesterday I ran for over 3 miles non-stop. Haven't done that since June 14th (9 weeks ago).

Two goals...
1) To see if my achilles holds up during and after the run.
2) To get some rough measure of my fitness compared to the end of May.

Goal 1. Achilles felt perfect for about 15 minutes, but started to ache a little around mile 2. Slowed down a little and it went away, so no problems there. Iced when I got home and didn't have any issues that evening. Slept last night with my ankle brace/night splint (I'll explain that one in a post soon) and this morning it feels OK. I'll find out for real once I get moving about.

My next run will be Saturday, when I'm planning to do 4 miles at 8:15 pace. Before then I still have a couple of days in the pool.

Next week I officially exit my "pool running phase" and enter my "fitness rebuilding phase". Unfortunately, that doesn't mean zero pool running, it just means that there will be more real running than pool running. The goal is to gradually build up the mileage over the next 13 weeks (thru mid November) to hopefully get back to where I was at the end of May.
Posted at 8:03 AM No comments:

I am sitting on the deck in Tahoe, icing my achilles, after my first run in about 2 months!

After an easy 10 minutes run/walk warmup and stretching, I ran for about 20 minutes, at round about 9-10 minute pace. Overall it was 3 miles, mostly on soft dirt trails thru the woods and reasonably flat. I walked up any hills but other than that ran pretty solidly, albeit at a fairly gentle pace. At the end when I left the trail and got back on the road I could feel my achilles a little but otherwise it seems good.

Knees are still messed up just like before. I had been hoping that they would magically have fixed themselves too, but I guess pool running still keeps things tender. Assuming nothing bad happens due to this I will try running 3 miles continuously on Monday or Tuesday.

It feels really great to be able to run again, I am crossing my fingers that I am over the worst.
Posted at 10:06 AM No comments:

Yet another week of no running goes by. Just 3 sessions in the pool this week, less than 20 miles and only 2 hours 15. Total time running in the pool is now almost 17 hours, which is about 17 hours too many.

My achilles is strangely starting to hurt a little more - probably due to the fact that I've been stretching a little more. It's now hurting at night when the foot is bent (so the tendon is being compressed). Research seems to indicate that this could be because it has healed and there is scar tissue that's getting squeezed. I now sleep on my front with my feet stuck off the end of the bed, which keeps the foot at 90 degrees and avoids compressing (or stretching) the tendon. That helps. People who've been thru this mention that they had some pain like this and that the first few runs usually "sorted things out" as the scar tissue breaks down.

I am going to try a 20 minute run this Wednesday or Thursday up in Tahoe on a nice flat trail. I'll be sure to stretch/warmup before and ice afterwards. Hopefully it'll all be good, my scar tissue will sort itself out and I'll be back out on the roads again!
Posted at 8:05 AM No comments: