So July is over, another wet month for me. Slacked off a little in the middle of the month but got back on track this last week or so.

Nursing my achilles problems the whole time, and stuck with the deep water running.

Assuming I don't encounter any setbacks, by the end of the August I'm hoping to be strong enough to be running 4-5 times/week and pool running just one day. September will continue on the 4-5/1 model, but gradually introduce some faster paces. If things are all going well I'll run a 10k on September 16th to see what my "summer of splashing" has done to my fitness.
Posted at 7:31 AM No comments:

Week 6 (of hopefully, just 9) is coming to an end, and assuming I drag my carcass thru the pool tomorrow it'll be the full 5 days in the pool this week. The first time I've hit all my planned workouts since the first week of this aquatic journey. Plus I swam 20 lengths last night just for grins. 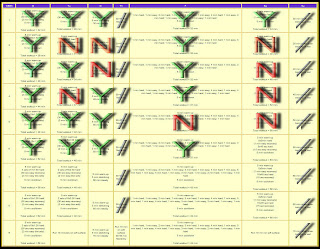 Here's my progress against the plan for the 9 weeks of pool running.....

A green "Y" means I did the workout, a red "N" means I had some lame excuse and wimped out. Given the fact that I had been running 6 days/week pretty much every week, rain or shine, it is obvious that I don't like pool running all that much.

The long "run" this week was over an hour. For me, that is a long time to be running in the pool. After 20 minutes I was thinking about bailing out but I decided I was going to be hardcore and "push thru it". Spent the next 40 minutes projecting where I would be if I was running my favorite 6 mile loop thru the hills. It got me to the end and I felt like a superhero for finishing. Nothing can stop me, I am invincible!!!!

That night I watched a movie called "Running on the Sun", about Badwater, a 135 mile endurance race that starts in Death Valley and climbs up to the top of Mount Whitney. The winner that year ran it in something like 28 hours. Some crazy lady was hallucinating, guys were throwing up on the road, some marine dude needed an IV, it was 130 degrees during the day. and climbed 8,000 feet. After that, I didn't feel quite so hardcore for splashing around in the pool for an hour.

But it's almost time to register for the London Marathon (April 2008), and I am starting to get really excited about that. Hopefully both my brother and sister will get selected thru the lottery and all three of us can run it. I'll try the lottery too as a UK resident, but I can also buy my way in thru a travel company since I'm an overseas entrant.

The one upside of pool running is that it is much more of a full body workout. I feel a lot better in terms of overall muscle balance and I am hoping that it will help me when I get back to running on the road sometime in August. I'm going to run/walk a couple miles this Thursday, and maybe a few more on Sunday if things go well, but it'll be August 8th (in Tahoe) when I finally try to run 2 miles solid. It will have been 55 days since I last ran properly (June 14th - a very hot 7 miler that almost killed me). Given that I hadn't run at all prior to April 2006, I can't believe how much I miss it.
Posted at 9:14 PM No comments:

Another week splashes by....

Five weeks down, four to go (Hopefully). Only three pool running sessions this week, but all of them pretty brutal. I've decided that if I'm going to get in the pool and run I may as well go for it. The new goal is to pool "run" hard enough to make me throw up. I have got close to puking at the track doing 400 meter repeats but never quite crossed the line.

Now this may sound a little extreme, but I need to have a goal and there's little else measurable in the pool to strive for.

Monday was 2 sets of 9x1:30 hard effort, with 30 seconds rest. That may not seem like much, but it's like running 18 laps (4.5 miles) of the track at 6 minute pace. About 6 intervals in, I picked up the pace bigtime and after doing 3 real fast, thought that this pool thing might be a good workout after all (heartrate up to 170). That was the start of the "pool run 'til you puke" goal...

The second set of 9 was not quite enough to reach my new goal despite doing the last 3 all out (the kids thought I'd gone crazy). Two days later was 2 sets of 5x2:30 with 30s rest. This didn't get me quite as close. Today was 50 minutes steady to hard effort - that is definitely a tough workout, and its hard to get out of the pool at the end, but it is not going to do it. I think the short intervals are the key, so I need to really focus next week.

That is going to have keep me motivated until August 2nd (11 days from now), as that is the next time I'm running out of the pool. Still hoping to get back to some level of normal running by August 20, but we'll see....
Posted at 7:54 PM No comments:

4 Weeks in the Pool

I've been doing my best Aquaman impression for almost a month. First week was 5 times, the next 3 weeks were only 3 times. But still, it's almost 8 hours of pool running, or 61 "miles". I am definitely ready to be done with this particular stage.
Achilles is good, no pain anymore. I started stretching again this week and I'll start the eccentric calf exercises this week. A couple miles running is planned for Thursday (run 2 mins, walk 1 min). All in all things are going well and I feel confident that I'll be able to start building up the mileage by the second half of August.
I've picked out a couple races and made a plan. I am hoping to be able to train enough to match my pre-injury 10k time (which was on a hilly course) at the Banana Chase in SF on Sept 16th. Then if that goes well, match my half marathon time from the hilly (but short) Santa Cruz race in the San Jose Rock'n'Roll Half on October 14th. Then it'll be time to pick things up again and get back on track for the sub 1:30 half marathon assuming I can find one in December.
Here's how it all looks graphed out..... 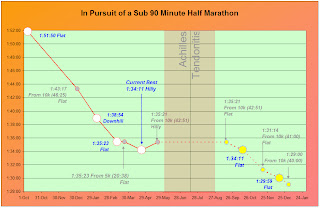 It's been 4 weeks since I decided I needed to take some serious time off. Things are going well, but most likely I have another 4-6 weeks of pool running before things are back to normal.

I have been attempting to design a 15 week training schedule that takes me from August 20th to December 2nd (race day) dealing with the fact that I am starting at 10 miles per week and not 50. Although mathematically I can schedule an aggressive ramp up in mileage and training intensity it is looking quite ugly. During the 15 week plan, I'd only get 3 weeks at 50 miles and only have 4 long runs anywhere near 20 miles.

I could probably do it, and maybe run the marathon around 3:45 but I really wouldn't be prepared properly. Having run 2 marathons unprepared, I don't have much desire to do it again. Also, the risk of reinjuring myself on that sort of plan is very high - which would put be back at the beginning of pool running once again.

So I have made the decision to skip California International. I will emerge slowly from the pool like something from the primordial soup, over the next 6 weeks, and then spend 3 months rebuilding mileage and speed. That will involve some races to assess progress. By mid November I should be back where I was before injury (running 50 miles per week) and ready to jump into a solid 20 week training plan leading up to the London Marathon (April 13th).

This is the conservative, sensible plan. "Going for it" at the Sacremento race in December is almost certainly going to end badly and I really don't have the will power to deal with another round of extended pool running.

So now I get to pick out a bunch of races, starting with a 10k on September 16th, to assess progress. This will tell me how much my fitness has dwindled. I'm really hoping that I can get close to the time I was running back in May.
Posted at 6:28 PM No comments:

Today was a big day! I ran for the first time in 21 days. It was a monster 1.48 miles, alternating every minute between easy running and walking. Average pace was a blistering 11:32. No achilles pain during or after, so that's very good news. Plus, my new Mizuno shoes were very comfortable.

But it's back to deep water running in the pool tomorrow. I'm going to keep running to just 1 day this week as there is no point pushing it.