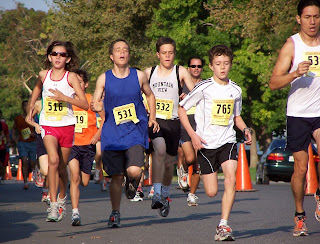 A 5k today, which is probably the softest of my PRs to beat at 18:53 (adjusted to take into account a ridiculously short course when I ran an 18:06).
I had two goals, with the A goal being sub 18 (or 5:47 pace), and the B goal being sub 6 minute per mile pace (18:36). Based on my recent running, A was a stretch, and B should have been fairly easy.
It was a warm day, so I was happy to be doing the 5 and not the 10k.
Start was fast, fueled by the youthful exuberance of half a dozen 10-11 year olds who were off like a shot. Usually they fade after quarter mile but these guys hung together and went thru the first half mile around 5:30 pace. I let them go as I figured they may be young but they are unlikely to keep that up for 5k, and the maturity of 43 years, and the endurance of running 70 miles/week hopefully comes youth and ability. 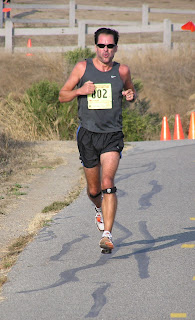 I went thru mile 1 in 5:47, dead on pace for 17:59. There were 3 runners a good 20 seconds ahead, then 3 of the little guys still hanging in there, and then me. I was feeling the effort from the pace and was pretty sure sub 18 was not happening. I was hoping that the others were feeling it too!
The 3 kids faded a little in the next half mile and by the time we turned I was clearly in 4th place, with no-one really around me. We crossed a rickety bridge which cost a few seconds and mile 2 was done in 6:00. I was hurting, and not enjoying myself all that much. (Note to self - 5K's suck).
Managed to hang on for mile 3, also at 6:00 with no lead changes. I could barely see #3 up ahead and didn't see/hear #5 so just kept going, trying not to throwup or collapse. 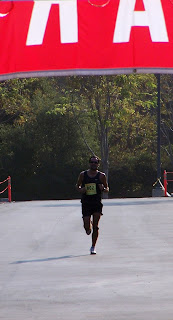 Managed to pick it up for the crowd at the end and got down to 5:30 pace for the final .1 mile despite being completely on my own, coming in at 18:22, or 5:55 pace. Took 4th overall, and was fortunately a good 45 seconds ahead of everyone who is in the same school as my kids! 3rd place was over 30 seconds ahead so I'm glad I didn't go all out to try and catch him.
So in between goals A and B which is kinda what I expected. Plus it was my first ever race under 6 minute pace!
So a little over 60 for the week. This week will be 45ish, so that is pretty much it now until Chicago. I'll do a few tempo miles, some pace miles, and maybe some 1600s at the track, but nothing difficult. Hopefully the hay is in the barn as they say.
Posted at 2:05 PM

Way to go, Alan. That's a really fast run in the heat!