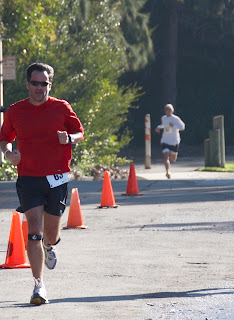 Woke up at 7 when the kids decided it was time to get up. I think I had a little too much food and wine the night before so wasn't expecting too much as I lined up at the start of the 10k race. But it was a beautiful day and a fairly small field (150 people) although most people looked like real runners.
I had a very fast start (6:30 pace) and it took me almost a mile to get on my planned pace (7:30ish) but then I settled down. Focused on staying on pace through mile 3 and then spent the second half of the race trying to catch the people in front. I reeled in about 6 or 7 people between miles 3 and 6, and no-one passed me. I finished with a strong final 3/4 mile for a time of 46:25, which was 7:28 average pace. I was very happy with that! Imagine what I could do if I wasn't dehydrated!?

However, when they posted the results about 30 minutes later I wasn't on the list! I went to the race director and he checked my number. Apparently I'd run down the right instead of the left finish chute (both of which were unmarked...) and they had me down as a runner in the 5k race that started 30 minutes after we did. It seems I had won the 5k in a time of about 16 minutes. I decided against taking the trophy and told them I was a 10k runner. After a little doinking around on the computer the director told me I had come in 27th place. Not bad - in the top 20%.
Although I'm not completely sure yet, I don't think I was beaten by anyone under 15, or over 60, which is a big first for me in racing.
Hopefully this is a sign for how the rest of 2007 will go!