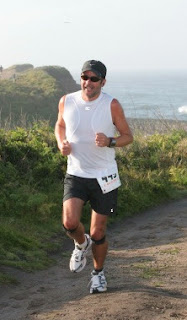 The plan was to try to run on pace (7:10) pretty much the whole way and try to make up any lost time due to the uphills on the downhill. I wasn't feeling too confident going in to this so I told myself if I can get thru mile 4 on pace (which ends at the top of a hill) I would go for it, otherwise I'd make it a training run. Weather was great (high 50's/low 60's and sunny) , after a wet, wet night, it cleared up and the sun came up just as the gun went off about 7:15.

Miles 5 to 8
Mile 5 started with a steep downhill and I hammered it at 5 something. That was a mistake and my quads complained bigtime. Settled down and got thru 5 at 6:59. 6 was painful (because of 5) at 7:22. 7 and 8 were on a trail overlooking the ocean which was an amazing view: these went by OK at 7:16 and 7:24. At this point I realised that my Garmin GPS was reading differently than the mile markers, so I stopped worrying about garmin pace and decided to just go by time at the mile markers.

Final 1.1
Just into mile 13 I caught someone, he kept with me for 20 steps and then he completely fell apart - this was a huge boost for me so I kicked with all I had (whch was not a lot). Got to the final downhill and somehow managed to keep my legs from buckling under me. Turned the final corner and saw the finish line just ahead. I was only at 1:39:50! Obviously mile markers were a little randomly placed - The last 100 yards were on the beach so I sprinted thru the sand with what felt like people were holding my ankles. Crossed the line at 1:34:12! I couldn't believe it. Final mile pace was 7:09 so I'd finished strong. If I'd known I was so close I could maybe have hit that mile 12 a little harder.

So bummer, I didn't beat 1:34, but I got a 70 second PR on a course with some hills. Plus I learned a little about mile markers in the process too! Overall I am really happy with the day - I stuck with it and didn't wimp out.