So yesterday was the Oracle 5k. About 500 runners on a flat out/back course. It was ridiculously hot, probably 90-95 degrees, practically no wind and no shade.

Started too fast, as usual. first quarter mile was at 5:41 pace. tried to get under control but still the first KM went by at 3:44.

2nd KM was slower and back on track at 3:52, but it was getting ugly out there.

As we turned around at 2.5K it was even hotter coming back. there was a slight cooling breeze on the way out and it disappeared and the turn. 3rd KM slower again at 3:57. definitely dragging now.

By now I'm hurting and in 6th place. the guy ahead is probably 20 seconds ahead and the guy behind is probably 15 seconds. no-one seemed to be much in the mood for heroics so i just decided to try to keep going at the same pace.

I felt really horrible for the last 2K, and desperatly wanted it to stop. Way too hot and way too fast for me. I hit a new max Heartrate of 191, previously I had thought that 187 was my max HR, guess I'd never really pushed myself before.

Here's a picture of me finishing - I felt even worse than I looked..... 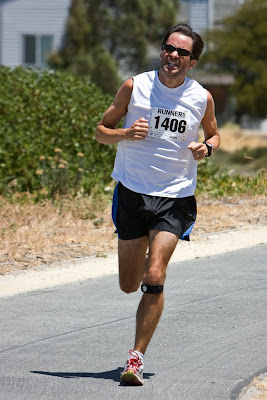